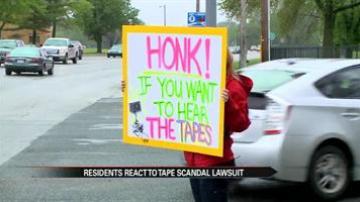 SOUTH BEND, Ind. -- The city of South Bend paid out upwards of $700,000 in December to settle lawsuits related to the South Bend Police tape scandal. Four officers split a $500,000 payout. Those same officers are suing the city, council and a council member. We asked Henry Davis Jr why he would be the target of another lawsuit about the tapes.

South Bend Common Council member Henry Davis Jr says he doesn't know what is on the secret police tapes, but he thinks it's probably good stuff.

Good stuff he thinks the public deserves to hear.

We made a sign that said "Honk if you want to hear the tapes" and Meghan Schiller held the sign in front of the County-City building, at the corner of Angela Boulevard and on SR23.

She got a lot of honks from men, women, city vehicles, police cars and driver Shirley Buras.

"I think to go back to court with this again, I mean how much money do you expect to get out of this?" said Buras.

Buras not only honked, she pulled over.

She isn't too happy hundreds of thousands of dollars of tax payer money is going to what she calls a "total waste of time."

"Very upset because our taxpayer money is not going in the right places. I mean I could name a number of things that need to be done and I think we're wasting our taxpayers money on something so silly," said Buras.

Davis wrote to the Justice Department "We need a full investigation into the policies, practices and behaviors of members of the South Bend Police Department."

The officers say in their lawsuit his actions were malicious so they are suing Davis, the council and the city of South Bend.

Teresa Whittaker doesn't want another lawsuit to come and go.

"That's a lot of money, so I just want to know what's on the tapes," said Whittaker. "Because I want to know if they're in the wrong or not."

The lawsuit from those four officers says that Davis has either listened to the tapes or learned what's said on the tapes from an unknown individual who has heard them.

When I asked Davis if he's heard the tapes he said he would have turned them over to ABC57 News a long time ago or he would have uploaded them to YouTube.