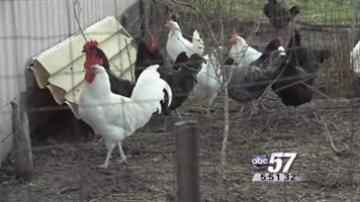 SOUTH BEND, Ind. -- Urban farming has taken off in all parts of the country.

Last fall, a St. Joseph teen got the issue of keeping chickens in city limits on the ballot. Voters didn't pass it, but the chicken debate could be clucking its way back to Michiana, specifically in South Bend.

On his Facebook page, Mayor Pete Buttigieg posted: "Urban chickens are in the news again. Would citizens here embrace the movement?"

He got a couple dozen responses. Some folks are concerned about cleanliness saying they belong on farms.

Others are very much behind it, stating that there’s a growing real-food movement in the community, and many other progressive cities are already on board, like Indianapolis, Chicago, and New York City.