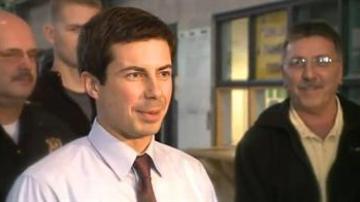 SOUTH BEND, Ind. -- The first snow of the year just so happened to land on another big first! Monday marked Mayor Pete Buttigieg's first full day on the job!

The snow piled up outside the County-City Building on Monday.

The offices were closed and doors were locked, but the work wasn't stopping in the office of the new mayor, Pete Buttigieg.

“Well, this is what you get for taking office in January,” joked the mayor.

On his first full day of work, South Bend was pounded with snow.

“We knew we had to be ready to hit the ground running,” said Buttigieg.

It covered the sidewalks, roadway, and everything else, but the mayor said city crews were working to clear it.

“We have 28 trucks, 47 guys working 12-hour shifts to make sure that the streets are clear,” said Buttigieg.

As the new mayor talked things over with the Street Department and others, he had more on his plate than just the snow.

“We’re setting up the office and getting ready to work with departments on the first full day back to work for city employees, but you can’t put anything on pause, we’ve got to be on top of this too," said Buttigieg.

As the snow melted off the trucks, taking a break in the city garage, the mayor was off to finish his first full day on the job.

With a snow covered path, he asked everyone to remember to take it slowly.