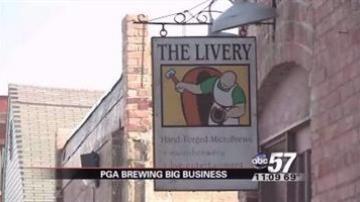 BENTON HARBOR, Mich. -- It's official the PGA has finally come to Benton Harbor!

And it has many people in the area saying the city hasn't looked better!

But the PGA is bringing more than just aesthetic appeal. It is also bringing big business!

Livery bartender Tim Zimmerman said the only thing better than the taste of his ice cold Harbor Shores specialty beer is seeing Benton Harbor flourish for the first time in a long time.

"It looks gorgeous it is the best I can ever remember seeing it," said Zimmerman.

He said staff at the livery have been preparing for weeks in anticipation for all the business from the tournament. They revamped their menu.

"About three weeks ago we got our fresh meats in and made special brats that are different flavors and stuffed brats," said manager Walter Rouse.

Livery also made a specialty brew.

"It's an all American amber ale with a nice and malty lightly bitter in the finish," said Rouse.

And they even had their staff brush up on golf lingo.

"We had flash cards so they can learn and when they see somebody, you know how to talk golf," said Rouse.

Zimmerman says more than anything he hopes the PGA will give Benton Harbor some exposure, so people will return.

"It's going to showcase not only this area, but the golf in the area and the beaches we have," said Zimmerman.

And he said it's been pretty cool bumping elbows with the golf pros too.

"They seem to like the course, but they do say it is very difficult," said Zimmerman.