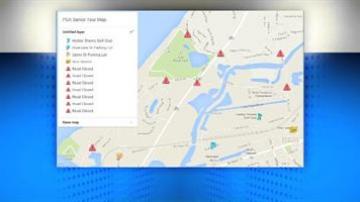 BENTON HARBOR, Mich. -- Thousands of out of town visitors are at Harbor Shores in Benton Harbor for the first round of the Senior PGA Tour. Local businesses are hoping the big weekend will mean big business, but getting the visitors in the door might be tricky.

There are two parking lots for tournament visitors, who are bussed to Harbor Shores.

The buses go either down Main Street or down Whitman to the green.

"It's kind of hard to see people pass by in busloads, try to get them to stop but I guess they have a course and a route, they have to stick to that route," said Terry Stokes, owner of Lark's Bar-B-Que.

Big spenders are in town this weekend and businesses in Benton Harbor are just hoping to be able to cash in on the action.

"We're hoping that people will kind of come off the course and come down town an enjoy the concert, good food and entertainment here," said Stokes.

The PGA has signs throughout St Joseph and downtown Benton Harbor to make sure drivers don't make a wrong turn.

They want tournament goers to park in a lot and hop on a shuttle.

Mary Donald lives a mile away from downtown Benton Harbor.

She says the PGA bus route is no mistake.

"It is very segregated, very segregated," said Donald. "What's wrong with the trolley car going all through the town of Benton Harbor? Don't shelter us like we're nobodies."

Donald says it's nice that Benton Harbor is home to the Senior PGA this year, but she says there's no need for the strict driving routes.

"Let the people come through here and see what they are investing in. It's more to Benton Harbor than that PGA and Main Street," said Donald.

Stokes agrees that less of a divide could be beneficial.

"Benton Harbor has some unique history, some historic homes and stuff and I think that if some people found out about some of it, they might want to come back and invest here, whether it be business or residential," said Stokes.

In the meantime, he just hopes people find a way to break away and stop in for some barbecue.

Some of the businesses are staying open later and relying heavily on the concert series and wine tastings to attract people to businesses downtown.

Click here for more information on the downtown shuttle.