Phony cop still on the loose 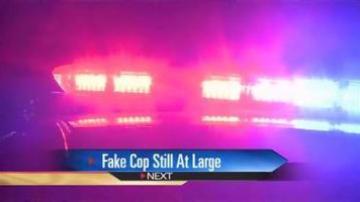 SOUTH BEND, Ind. -- On Veteran’s Day, a man claiming to be a police officer pulled a South Bend family over and threatened the father’s life.

The man’s wife talked exclusively with ABC 57 News. The incident was so frightening for her; she only agreed to talk with us if we did not reveal her identity.

“He started yelling at my husband and at the end of it he threatened him with his gun and said I should shoot you in front of your family, said the victim.

This victim said she was stunned when she and her family were threatened by a man claiming to be a police officer.

It happened around 5 p.m. on Veteran’s Day. She and her family were leaving the parking lot of Target.

“My husband pulled out and there was a black Chevy Impala. He was moving at a high rate of speed so therefore my husband cut him off,” said the victim.

They got pulled over by what they thought was a police officer.

“He held a badge out his window and was screaming at my husband,” said the victim.

During the rant, the suspect told the family he had a gun and then threatened to shoot the victim’s husband in front of his family.

“At that point, my husband sped away.  We obviously knew this is not a police officer we are dealing with,” said the victim.

The victim and her family called the real cops who came out to take a report.

They gave her some advice that she wants to share with everyone in the area just in case they run into this armed and angry phony officer.

“He said that you can keep driving and call the police station and describe the car.  They will be able to tell you if you should pull over,” said the victim.

The victim also said her 5-year-old son was a little traumatized by the incident and told the teacher and a few classmates what happened, so the South Bend Police Department was nice enough to send a few officers down to talk with the kids about what real officers look and act like.