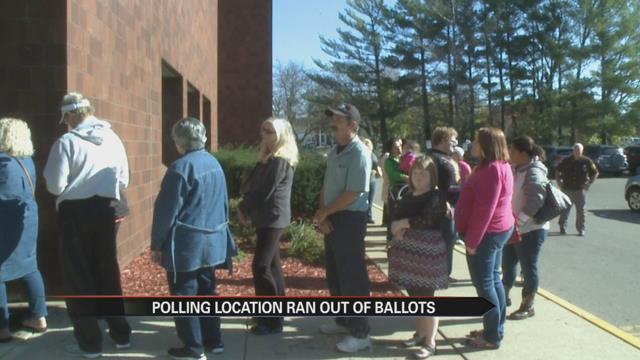 After a shortage of ballots for a precinct in Mishawaka voters were given a photocopy of the original, which then gets filled out by the precinct board later. Some voters had never heard of anything like this and it made them uneasy.

Voters registered in Penn Township had to use photocopied ballots. St. Joseph County Clerk, Terri Rethlake says they didn’t expect this large of a turnout for early voters.

Even though the clerk told ABC57 today that records weren’t broken there still weren’t enough specific ballots for District 3.

Rethlake told ABC57’s Diana Gutierrez 70 percent of ordered ballots are saved for Election Day and 30 percent are used on days leading up to the election.

“Apparently we had over 30 percent of that precinct come and vote early and we couldn’t go and get a regular ballot because they’re sealed away,” said Rethlake.

So instead they gave voters a photocopied version of a ballot, which the voter would fill out first, then an inspector and two judges will finish.

“The precinct board will remake the ballot as the voter has circled on a ballot that they have and then that will be fed through the tabulator,” said Rethlake.

The percentage of ballots used was pre-determined months ago. Rethlake adds this shortage is not something she would consider normal but their actions are proper protocol.

Erin Cooke was affected by this shortage. This was her first time voting and she thought the idea of using photocopied ballots was strange.

“I didn’t know these women so how do I know they’re going to make sure they cast my vote the way that I voted for them. It was just a very uncomfortable situation,” said Cooke.

She says she put her trust in the poll worker assisting her, but will not come back to early vote in the coming elections.

“They want people to vote early and they want young voters out there but it’s like , “ Okay I showed up for you when you told me to show up and you didn’t show up for me,” she said.

The county clerk says they should have enough ballots for all registered voters tomorrow, but if there is a shortage they’ll be prepared to restock with unused absentee ballots.