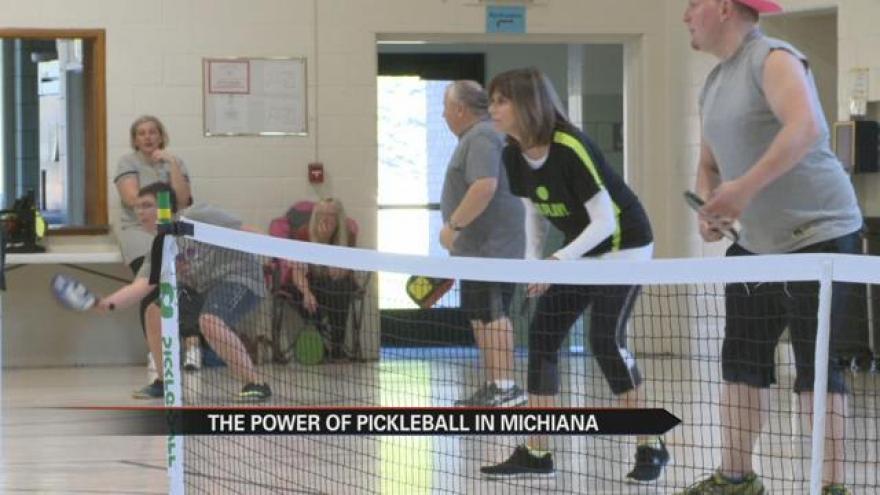 Pickleball is one of the fastest growing sports in America

A sport that just celebrated it 50th anniversary last year.

So what is pickleball?

"We say tennis and ping pong had a baby cause it's ping pong, tennis and a little bit of badminton,” says Clark.

"It's kind of a combination between tennis, ping pong and racquetball," said Falletta.

Pickleball is growing in popularity in Michiana.

All thanks to Myles Nugent, who first introduced the area to the sport when he moved from Arizona to Niles in 2011.

Now, these four are spreading the word like wildfire.

Like doubles tennis, pickleball mostly features four players whose main objective is to come to the net.

“Then you do a thing called dinking. Where you are hitting it back and forth until you get that kill shot,” said Doug Clark.

In pickleball the first team to 11 points wins.

Unlike tennis, ping pong and badminton there is an area of the court that’s forbidden and that place is called the kitchen.

Cooking in the kitchen is not allowed.

These days it's hard to find a court empty or a paddle not in hand.

“We have pickleball communites up in Coloma, St. Joe and now in northern Indiana, La Porte, South bend. It's very addicting. Everyone that tries it says it’s a very addicting game and a lot of fun.

The 70 year-old northern Indiana Pickleball Ambassador has lost 75 pounds since he started playing and credits the sport for saving his life through difficult times.

There’s proof of the real power of pickleball.

“You know quite often after we have a few matches we'll go out and grab a burger and a beer, so it's a very social game too,” said Doug Clark.

From southern India to Michiana Father Savarimuthu came to the area to spread the word of god.

After falling in love with pickleball the Father found a new purpose.

So in came new lights, a new floor and new lines for the game he loves so much.

But the father is not so generous on the court.

“I'm quite competitive. But when  I  play pickleball,  I 'm not that friendly. I want to be serious,” Savarimuthu.

Using that infectious smile this unlikely pickleball preacher is serving a double feature.

"Pickleball would not be where it is, specifically in Niles, without Father Alphonse and his out reach program," said Falleta.

If you can't catch him on Sundays, this close knit community knows they can find him in his second home.

"It's been such a pleasure getting to know him. He’s a friend too. Our pickle ball buddy. Our pickleball Padre," said Diana Clark.

Whether you think of him as a friend or Father figure, his message remains the same.

"Asked him do I have to be catholic to play pickleball, and he said no, you just have to be human," said Clark.