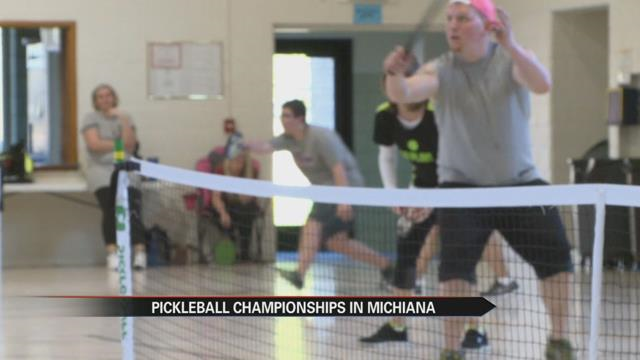 A pickleball tournament kicked off at the South Bend Racquet Club in Mishawaka at 8 a.m. on Friday.

The clinic will give participants the opportunity for time on the court and learn about different strategies for playing the game.

For people who have never played before, it is a game that can be played by anyone at any age.

“It’s fun from the very beginning. It’s a high rally sport. You can have rally’s up to 40-60 volly’s back and forth,” said Curtis Smith who is CEO of Paddletek and also a Sponsor for the tournament.

Paddletek is a business in Niles that makes paddles for pickleball players. Smith said that more than 50% of players who compete use their products.

The business got started only four years ago and already is the official paddle for the U.S. Open. Paddletek all started after Smith's brother began playing the sport and got addicted.

“My brother got bit by the pickleball bug and was having to replace his paddles every 4-6 months so he figured there has to be a better way, there’s got to be a better paddle," Smith added.

Pickleball can be described as a mix between tennis, badminton, and ping-pong.

It has been in existence for about 50 years and is gaining momentum in Michiana.

“What the baby boomers discovered is it’s an actual sport that they can still compete in so you can have grandpa who can play his granddaughter and still have a chance to beat her,” said Smith.

The tournament will be from Friday-Sunday. Saturday at 8 a.m. the mixed doubles will start. For more information on the tournament, click here.