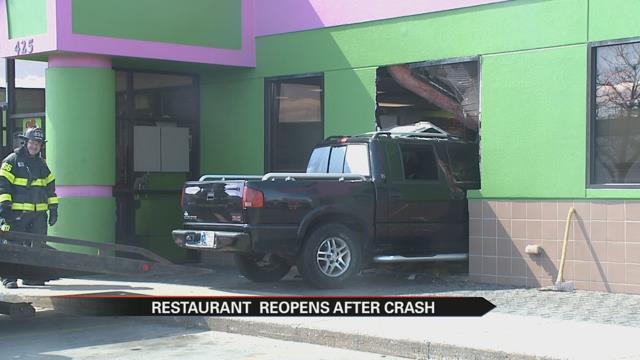 “I was cutting up turnips, then all I hear is a big bang, like if someone had dropped a whole bunch of glass bottles,” manager Erika Garcilazo said. “Then I turn around and I see the wall and the car.”

A black pickup truck jumped a curb in the parking lot and careened right into the grocery section of Flamingo’s around 12:30 p.m. Sunday.

“It was intense, it was really intense,” Garcilazo said.

Though the grocery section of the store was left in shambles, nobody was seriously hurt in the crash.

“Quite a few occupants in the building, but nobody, fortunately, [was] right where it happened,” South Bend Fire Dept. Battalion Chief David Maenhout said. “It could’ve been much worse.”

Officials believe the female driver put the truck in drive as she was trying to back out of a parking spot.

She and her adult son had to be freed from the truck.

“They were both in the front and the only door they could exit the pickup truck was the right rear, so we kind of had to fold the seats down, they had to climb from the front to the back and out there,” Maenhout said. “But they were able to walk on their own; no need to transport on a stretcher or anything.”

Both were taken to Memorial Hospital with non-life threatening injuries and are expected to be okay.

Meanwhile, customers and workers looked on as the truck was peeled out of the building, and then the massive cleanup process began.

Despite causing about $100,000 in damages, one of the restaurant’s owners echoed first responders in saying the crash wasn’t as bad as it could’ve been.

“It could’ve been a lot worse if it would’ve been on the other side in the restaurant area,” Alejandro Garcilazo said.

The gaping hole in the wall was boarded up early Sunday afternoon and Flamingo’s reopened less than four hours after the crash.