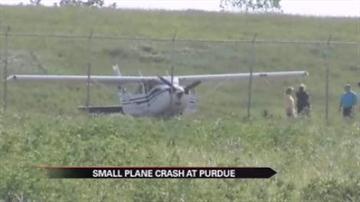 A plane crash at the Purdue airport has investigators scratching their heads.

Police say the crash happened in the middle of the night.

The airport’s director reported the crash around 8 a.m. Wednesday.

When officers arrived to investigate the pilot was nowhere to be found.

They think the pilot missed the runway and hit the fence.

Police say the plane is registered to a San Diego company.

The FAA is headed to the scene.