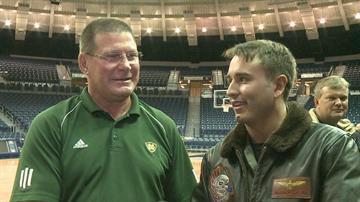 NOTRE DAME – The flyover  at Notre Dame Stadium on Saturday is going to be just as divided in the sky as it is on the field. Two F-18 D planes will fly over before the game. Two of the pilots are Notre Dame Grads and two graduated from the Naval Academy.

He said it’s a dream come to fly over his Alma mater.
"Did ROTC at Notre Dame and always dreamed of one day of flying and maybe someday coming back to fly over the stadium and I'm getting the chance to do that this weekend. I'm excited about that,” said Brandon Gasser.
Graduating from Notre Dame isn’t the only connection Gasser has to the Fighting Irish. His dad, John Gasser, played football for the Irish from 1966-1970.
"I was on the National Championship Team in ‘66. We went to the first bowl game in 1970 and that was before Brandon was even born, so he didn't get a chance to see any of it,” said John Gasser.
Dad couldn’t be happier for his son. “He did come to Notre Dame and did a great job graduating here and now he's going to fly over the stadium. I wish I could do that, trade him places,” said John Gasser.
Both said they’re rooting for the Irish in Saturday’s match-up, but up in the air, it’ll still be divided between the four pilots.
"It'll be fine for the flyover, maybe after the game there might be a little tension,” said Brandon Gasser.
The flyover will happen before Saturday’s kickoff which is set for 3:30 p.m. at Notre Dame Stadium.
Share this article: