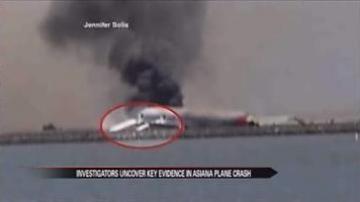 SAN FRANCISCO — Investigators are now focusing on two critical pieces of evidence in the final minutes of that deadly plane crash in San Francisco.

According to investigators, both pilots tried to abort the landing just five seconds before they crashed.

All of this new information was revealed from the black box recorder on the plane.

It also uncovered that the pilots did not discuss the speed of the plane until about nine seconds before impact.

A thorough investigation from the NTSB could take up to a year.