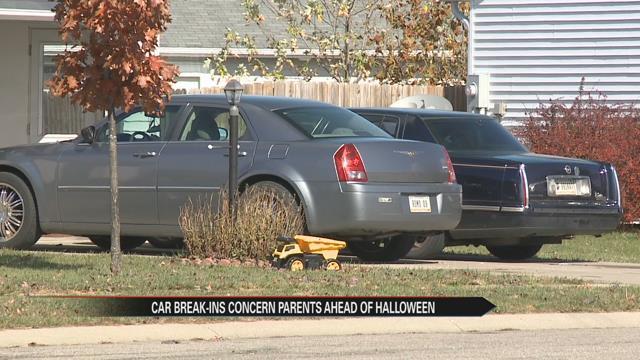 Halloween prankster or serious offenders, that is what Goshen Police are trying to find out and they need your help.

On Thursday police totaled 17 cars that were targeted in the Pine Manor neighborhood. Most had items stolen from them others were vandalized.

Neighbors say they saw two males causing havoc a couple nights ago. As of Friday an arrest in this case has not been made and parents are a little on edge about taking their children out to trick or treat.

On Wednesday night it did not matter what kind of car you owned. As long as you lived in the Pine Manor Neighborhood in Goshen chances are you or your neighbor’s car was broken into.

“Hey somebody broke into our cars,” says Christian Beall of Goshen as he relived his parents waking him up early Thursday.

Beall and his family were not the only victims. In fact 17 cars were entered and rummaged through.

The worst of the damage was done to a brand new jeep. The doors were locked so a window was broken to gain entry. Most of the other cars involved got off easy.

“All they took was a carton of cigarettes that’s pretty much it,” says Beall.

Police say not much was taken and entry was fairly easy.

“The doors were unlocked. We usually keep the doors unlocked because we don’t have much trouble out here,” explained Beall.

So this little trouble has his family on edge. The events even put a damper on one of their younger family member’s Halloween plans.

“This kind of ruined the Halloween for him. We wanted him to have fun like every other kid wants to go trick or treating and get candy but after what happened I don’t know,” says Beall.

Goshen Police say this incident should not ruin your Halloween.  Just like every year police will have extra patrols on Halloween night during trick or treating hours.