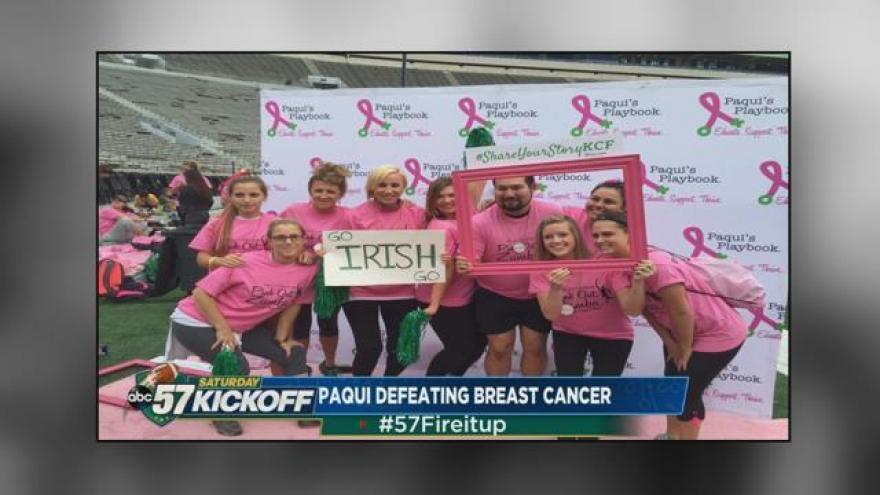 As the head coach, Brian Kelly is used to being the one calling the plays for his football team.

But not everyone knows his wife Paqui has a playbook and a team of her own.

It's called  "Pink Out Zumba" and it's an event right out of Paqui's Playbook.

"It was amazing. It was fun,” said Joy Shreve.

"It was a lot of fun. It was my first time in a big event so it was neat to see turnout and everyone going crazy and having a good time,” said Cindy Hamill.

Fun on the football field. Nearly 1,000 fans decked out in pink.

"Once you hear the music you just can’t stop. And then it’s over too fast. I was ready for another hour of that,” said Cheryl Wilkie.

These fans may be rooting for this Irish Saturday, but for this special event, they're hoping to win a different fight.

The fight against breast cancer - a battle that Rosalie Ferris and her friend Cheryl Wilkie already won.

"Mine was 46 years ago. There was nothing so I’m just now starting to celebrate. There wasn't anything for me as far as support or activities. It was just doom and gloom it really was,” said Cheryl Wilkie.

"It's a sisterhood. A connection you can’t break. A bond that beyond. A healing bond part of our healing,” said Rosalie Ferris.

A bond that brought them here to this year's Pink Out Zumba session to share stories of how cancer has impacted their lives.

"I’ve done a couple and to be on the field and for the cause... I’ve had a couple scares so it meant a lot to me,” said Charlotte Winters.

"I have family who have been affected by breast cancer. My cousin and my cousin’s mother,” said Cindy Hamil.

“So many people, they suffer from breast cancer and it’s really sad to see what people go through. Its nice, an event to be able to come and support people who have gone through it,” said Amy Louderback.

Support through movement and music and support for Paqui in her fight against breast cancer.

"The link with Notre Dame in Kelly Cares Foundation… it made a bunch of people come together to have a good time. It’s getting active and staying healthy… a positive event around cancer. " said Cindy Hamill.

That event was free and open to the public.