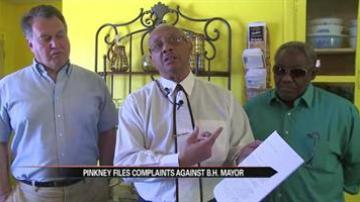 "His only desire was to stop the election. They had no intention of allowing that election to go through. They had to figure out a way to do it and they used this," said Reverend Edward Pinkney.

Pinkney says Mayor James Hightower went to extremes to make sure he was not booted out of office.

"We have filed criminal charges against Mayor James Hightower. James Hightower went out and manufactured evidence to stop the May 6 election," said Pinkney.

On May 6, Commissioner Marcus Muhammad was running against current Mayor James Hightower for his seat.

Days before the election, Pinkney was charged with election fraud.

He is accused of changing the dates on signatures and for allowing people to sign the petition more than once, then asserting he did not allow that to occur.

Because of those charges, the clerk asked that the election be put on hold. A judge granted an injunction and stayed the election until further hearing and order of the court.

On Monday, Pinkney read from a notarized letter that was allegedly written and signed by a Benton Harbor woman who wants to remain anonymous.

In the letter, she says after the mayor found out she signed a petition to have him recalled, she was pressured into lying and removing her name from the petition.

In the letter, the person wrote, "There was no deception or misrepresentation by Edward Pinkney. I am sorry for being forced to sign a letter that was not true."

Pinkney submitted the letter and other evidence to the Department of Justice, and Berrien County prosecutor as part of a formal complaint against the mayor.

"Hightower has promised that he was going to use all his resources to stop the recall election we have it on tape," said Pinkney.

Mayor Hightower says there is no truth to Pinkney's accusations.

The prosecutor says he received a complaint and evidence in the form of letters and a recorded phone conversation. He said the sheriff's department is investigating.