Pit bull owner: Dog shouldn't have died for my mistakes 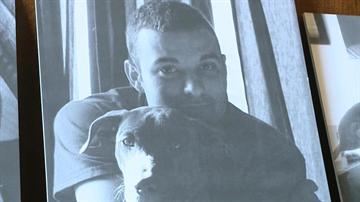 MISHAWAKA, Ind. – The owner of a pit bull admits he didn’t follow the rules regarding so called “dangerous breeds” in Mishawaka, but is questioning whether the St. Joseph County Humane Society should have euthanized the dog he claims did nothing wrong.

Craig Plotts’ nearly one-year-old husky/pit bull “Hank” was put down sometime over the weekend after being seized by the humane society last Thursday.

“It’s heart breaking to tell you the truth,” described Plotts.  “I went away to Iraq for a year as a soldier and then I couldn't have him, finally bought my first home and I said it's time, I'm going to buy my first dog."

Plotts said he obtained the proper license required to own a “dangerous breed” dog in Mishawaka.  But, he admitted, he didn’t follow rules requiring him to keep the dog leashed and muzzled while outside of his home.  Neighbors claimed the dog was aggressive and showed video evidence to the humane society.  One video shown to ABC57 by the neighbors shows the dog barking and biting at the fence, however Hank’s behavior seemed no different than the behavior young dogs of any breed.

The neighbors also explained that they weren’t biased against the dog’s breed, but only worried about the safety of their family.  They also said they had no wish for the dog to be euthanized.

“He knew something was up, everybody’s emotions were riled up,” Plotts described.  "He was actually hiding upstairs and was just peeking his head out, that's when I went up and got him and took him out to the officer "

With the help of a roommate Plotts hired a lawyer who asked the humane society to delay euthanizing Hank.  He then found a certified shelter in Middlebury willing to take in Hank.

“I understand if I can’t have the dog back, even if agree with it or not,” Plotts described his mindset.  “I don’t agree with taking his life.”

However, on Monday, Plotts was informed Hank had been put down.  Then, he said he called a funeral home who agreed to cremate the dog so that Plotts could have a burial service.  But, the humane society refused to turn over Hank’s remains.

“If a terrorist, Osama Bin Laden, could get a proper burial then, at most, why couldn’t my puppy?” an emotional Plotts asked.

Dr. Carol Ecker, Director of the St. Joseph County Humane Society, described Hank as “vicious and nasty” when asked for comment by ABC57.  She said she didn’t feel she could release the dog to a shelter out of safety concerns.