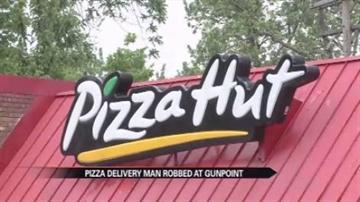 “Well I came out to have a smoke and I saw cops shining their spot light looking around,” said Martin Kearney.

Officers were looking for an armed teenage suspect.

According to the police report, a Pizza Hut delivery driver was delivering a pizza to the 900 block of Dubail Street, when all of a sudden, a teenager pointed a gun at his chest and demanded money.

The driver told the thief he did not have any money, then the robber reached in the driver’s front pocket and pulled out the only dollar he had, but the thief wasn’t satisfied.

He took the pizza too and took off.

The armed robber left behind some evidence.  Neighbors tell me they found this pizza bag in the alley way that the suspect discarded.

Kearney says he is still shocked someone was robbed at gunpoint outside his home.

“Since I have been here there has not been a lot of crime,” said Kearney.

With six kids of his own, Kearney says he and his family will not be going outside at night anymore.

“If they are going to rob a pizza guy, they may do a home invasion at your house.  There is no telling what is next,” said Kearney.

Pizza Hut did not want to comment about the incident, but they did tell me that driver is doing fine and is back at work tonight.