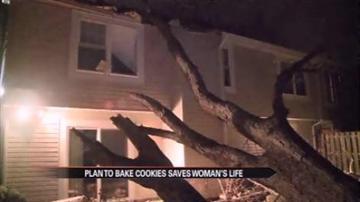 CHESTERFIELD, Mo. -- A batch of Christmas cookies may have saved a Missouri woman's life.

A large branch smashed through a window right where the homeowner had been sitting just minutes earlier.

The woman said she'd just gotten up and gone to the kitchen to bake cookies when she heard the crash.

“She was sitting pretty much where the tree came through, kind of a bigger bay window in the back busted all the windows out, a lot of drywall that came down off of the ceiling. It's a vaulted ceiling,” said Cpt. Chris Overy.

Firefighters said the tree caused so much damage that the homeowner can't go back inside until engineers can determine if it's safe to do so.

In the meantime, a neighbor has offered to let the woman stay with her.