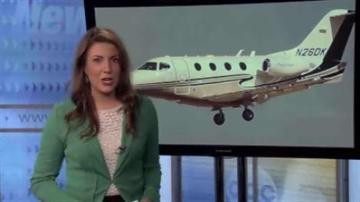 The flight was scheduled to take one hour and 25 minutes and should have landed at 4:23 p.m. EST.

According to the plane's FAA Registry the Hawker Beechcraft Premier 1 is owned by 7700 Enterprises of Montana, L.L.C.

The plane was manufactured in 2008.

The plane is designed to be flown by a single pilot but can also accommodate a co-pilot.

“In this case the owner was certified to operate it as a single pilot. He holds that type rating so that would be normal for him to potentially be operating it by himself. Is an aircraft that many smaller companies could purchase to travel particularly in the United States or with that type of regional domain,” said Randy Robertson of the Andrews University aviation program.

The FAA said the pilot called the tower and said the plane was experiencing electrical power problems. The plane attempted to approach the airport a number of times and on the last attempt the plane stalled and crashed.

ABC 57 got a copy of the plane's full flight history for the last six months.

Sunday was the first and only time the aircraft had a scheduled flight to South Bend.