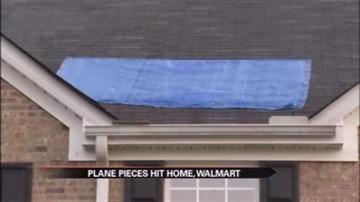 ATLANTA —  Federal authorities are trying to figure out why part of a 747 cargo plane fell out of the sky near the Atlanta airport.

A 20-foot section crashed into a Wal-Mart parking lot and a chunk of the plane hit one home.

That homeowner says she is just thankful no one was hurt.

"If it had landed in here because that is just sheetrock, it would have, oh boy I wouldn't be no good," said Pamela Ware.

Investigators say those pieces came from part of the plane's right wing flap. The pilot declared an emergency and was able to land safely at the airport.

China Airlines and Boeing have not released any information on what may have caused those pieces to fall off.