Planning ahead to maximize tax return 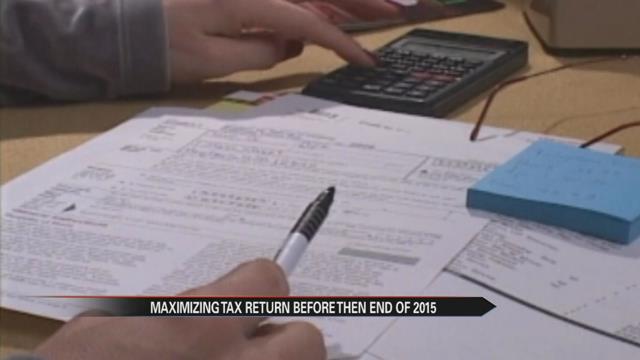 It is the busiest time of year for some shoppers and a time where people may spend more money than they make; however, it is never too early to start thinking about filing taxes, it could pay off later.

There are various tax strategies that can help people get the most out of their tax return according to CPA and owner of A.C.T Services Tina Moe.

“They need to take advantage of some of these strategies before December 31st to be able to use them on the 2015 tax return. There’s some tax saving strategies that would expire at the end of the year,” said Moe.

They are known as cash-based deductions to taxpayers.

"I always recommend that any of my clients maximize any type of tax deferred benefits like 401K, or dependent care benefits for child care and cafeteria plans. These things reduce taxable income,” Moe added.

Basically it means set aside money that you have already made to lower the taxes you pay on it,

“It takes your income and sets it aside before the taxes are withheld on your income so it allows you to take earnings and I call it taking money out of one pocket and putting it in the other and saving taxes,” she added.

A 401K retirement fund is an example of this.

“You still own that money but there are ways to shift your income, your earnings around so that you don’t pay income tax on it until later on, as is the case for a 401K.

”What is known as a cafeteria plan is a way to move money from one pocket to the other to help get more back on tax returns.

“Cafeteria plans are another one where you can set aside money tax-free and pay for various types of co-pays and things like that, that may not normally be covered under your insurance plans.”

Moe said another strategy people can use is through donating, both monetary and non-monetary.

“Donations are another way to save taxes and this is both from monetary and non-monetary donations, like household items and clothing to Goodwill and the Salvation Army. This can really add up,” she added.

While people are doing their holiday shopping and buying new clothes and toys to replace the old, donating them can pay off.

“For families with children who tend to have lots of clothes and toys that they can donate, that tends to add up to some good tax savings.”

She said it is important for people to keep a documented list of what they donate in case they are audited by the IRS. She added that Goodwill is one place that has an online list people can use for donations.

There is another strategy that can be helpful to those who have children in school.

“Another really powerful tax saving strategy for the state taxes is looking at contributing to the Indiana College Choice 529 plan. This plan allows you to contribute to a college savings account and receive 20% credit up to $1,000 on your state income taxes.”

Moe classified this as basically free money. It is an annual contribution so taxpayers can contribute every year and receive the credit each year as long as they qualify.

This is how that plan works.

Moe has been in business for two decades and said she has seen IRS scams increase a lot over the past three years.

“One message I’m looking to get out is to warn tax payers about the huge increase in IRS scams where taxpayers are receiving phone calls that are pretty hostile collections agents posing as IRS agents.”

The IRS does not make calls like this asking for money.

“If it feels wrong and this is the first time you’re hearing about owing the IRS money, do not give any personal information over the phone," Moe said.