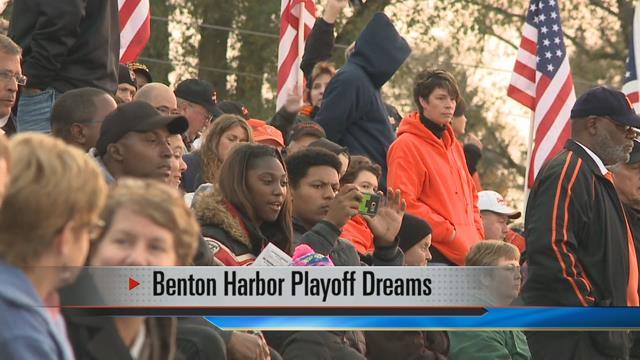 Benton Harbor High School’s historic playoff game brought out tigers from all over the city, and residents say the players weren’t the only winners.

“Win lose or draw, they are number one,” said parent Diane Young.

This year is different for this team and the community it represents.

And the Friday night lights shined a bit brighter for the tigers this season.

“They transformed themselves and when you get a chance to talk to them you’ll find out,” said Athletic Director Fred Smith.

The group of nervous student athletes transformed themselves into winners competing in the playoffs.

“I’ve never been a part of a football season that made it as far as they have tonight," said Young.

Their motivation to go far on the field inspired an entire community off the field.

“We want better, we want to do better together, you know that old saying, it takes a village, we’re doing that,” said Young.

And even though they picked up a win, parents say they would still love this team even if they lost.

“I’m a parent that believes in supporting win or lose but I’m just happy that the tables have turns,” said parent Yaquina Walker.

These fans will continue to show their uncaged tiger spirit.

And Benton Harbor will continue to restore their roar.