Plymouth residents digging out from 11.3 inches of snow 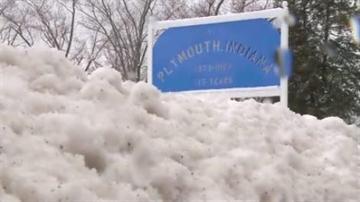 PLYMOUTH, Ind. -- Plymouth, Indiana received almost a foot of snow in Tuesday’s storm. While many people worked to clear the snow, others spent the day enjoying it.

"I heard on the news that it was eight inches,” said James Ellis.

So let the dig out begin.

Jeff Sliter had a few problems while shoveling the snow.

But he's getting some help clearing the snow from Mother Nature.

Some students were looking for a two hour delay.

But they got even more.

"When I woke up I heard my brothers and sisters say it’s canceled,” said Jacque Pratt.

For the amount of snow received, the roads are actually pretty clear.

The street crew stayed out until midnight then started up again at 3 a.m.