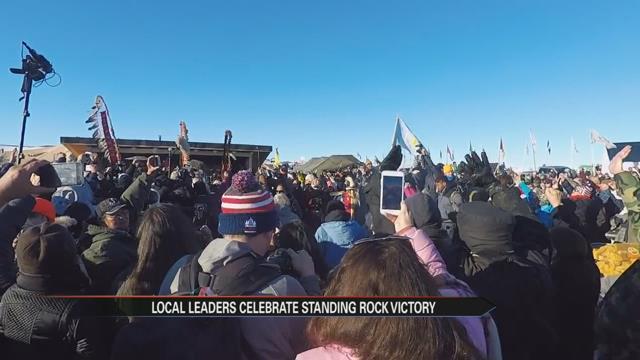 The Army Corps of Engineers announced Sunday it will not be building the Dakota Access Pipeline the original planned site that ran through Standing Rock.

The Pokagon Band of Potawatomi Indians are also expressing their support, sending nine government leaders along with supplies to protesters in North Dakota.

Many Pokagon citizens and leaders, donating supplies and even traveling to the Sacred Stone Camp to help protect the waters.

In a podcast on their website, Terri Getz-Raich, talks about her experience while standing in protest and why she decided to go.

"It lit a fire in me. That's it’s just time to do more. One morning I just woke up and said I have to go," said Getz-Raich.

Thousands of people like Terri gathered in protest at Standing Rock for months, opposing the Dakota Access Pipeline, which would have run by the Tribe's water supplies and cultural sites.

Becky Williams is a Youth Cultural Coordinator with the Pokagon Band.

"Feel really good about going down there and contributing to a bigger cause with all of our brothers and sisters down there," said Williams.

Just last week, the nine members of the Pokagon Band Government traveled to the camp to hand out first aid gear and cold weather supplies.

Paige Risser is with the Pokagon Band of Potawatomi.

"Definitely to have the Tribal Leadership speak in support and resolve in support of the protestors but then to fund the trip for them to go and be present at the site at the Sacred Stones Camp was very important to many Pokagons."

For citizens who traveled the nearly 1,000 mile journey from New Buffalo to Standing Rock, to see the 1,100 mile pipeline re-directed was a nice victory, but are still cautious.

"I have to go stand with my brothers and sisters to protect their water, their land and their rights," said Getz-Raich.

"A little unsure and uneasy at how it's going to go moving forward so nobody is too confident on what the next move in going to be," said Williams.

Williams releasing this statement only to ABC 57 News:

“We (The Pokagon Band) are all happy to come to North Dakota and help our brothers and sisters.  We were all able to to come together and rise up when called on and come together from all over the nation.  Everyone plays a small part for the bigger picture to fight for clean water, for everybody.  The Army Corps Of engineers denying the permit to drill was a small victory.  But I feel, like some people at Standing Rock, are reluctant to view that as a complete victory, rather a milestone.  There is still a good fight to be fought and their are plenty of people here willing to do it.  This experience has been humbling and fulfilling in more ways than I could possibly express.  Seeing so many people come together to selflessly is moving, and to be part of it, is an honor. Water is life (Mni Wiconi)”

The nine government members who delivered supplies are set to return by the end of the week.