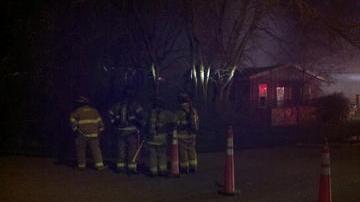 SOUTH BEND, Ind. - Fire crews are still on the scene of a pole barn fire on the city's south side.

The fire started at pole barn at a home on the corner of Nash and Edward Streets, an exact address wasn't immediately available.

A Battalion Chief with the South Bend Fire Department told ABC 57 News on the scene that no on was home at the time.

The structure was described as a pole barn/granite business, it's unclear if anyone actually lived inside.

Crews remain on the scene putting fire on the building from above on a ladder truck and from rigs on the streets.

It's unclear as of early Thursday morning how the fire started.

Nash and Edward Streets are still blocked off as of this posting at Indiana Street.