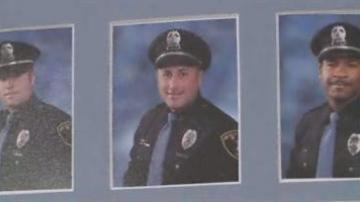 MICHIGAN CITY, Ind. -- Right now, a Michigan City police officer is on paid administrative leave after he shot a man on Wednesday night who police said ran from them.

But that's just the beginning.

ABC 57's Judi Lykowski went digging for answers. Here's what she found out.

Indiana State Police are handling this investigation, which is procedural after a department-involved shooting.

The officer involved is Patrolman Ronald Skibins, a six-year veteran with the force.

The person he shot is 20-year-old Daniel Sherrod.

Police said they tried to pull Sherrod over on Welnetz Rd., but he jumped out and took off.

Police said he ran through two nearby apartment complexes and Officer Skibins followed him.

According to the Indiana State Police, a struggle ensued and Sherrod tried to take Officer Skibins' gun.

That's when police said the officer grabbed his gun and shot Sherrod in the stomach.

But we spoke to Sherrod's mother on Thursday and she insists her son was not shot in the stomach. She said emergency staff at St. Anthony's Hospital, in Michigan City, told her he was shot in the back.

"I looked to see if my son was bleeding from the stomach and he wasn't. The doctor said there is only one entry wound and there's no exit wound. So no, he wasn't shot in the stomach. It came out his back as they are trying to say, he got shot in the back and bullet is still in him, so the police is just telling a bold-faced lie," said Eunice Hicks.

Why Patrolman Skibins pulled the car over in the first place has not been revealed. It could take weeks, if not months, to come out.

As for the 20-year-old who was shot, he was airlifted from St. Anthony's and is currently at Memorial Hospital listed in serious condition.