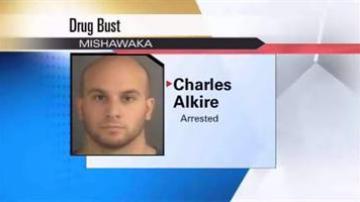 MISHAWAKA, Ind. -- Police arrested one man in a drug raid at a Mishawaka home.

Officers with the Metro Special Operations Section (MSOS), along with the Indiana State Police Department raided a home on west Mishawaka Avenue on Friday around 11am.

Lt. Tim Williams with the Mishawaka Police Department said the suspect had an elaborate grow operation in his home. Alkire's roommate told ABC 57 that the operations were contained to the basement of the home that he and Alkire shared. He also was worried about Alkire's future, he said
he had served two tours in Iraq and was using the money from growing pot to pay for college. He said Alkire was almost done and would be graduating soon.

On Friday morning there was a strong smell of marijuana in the neighborhood. The roommate told ABC 57 while he was being interviewed by police about the situation, they mentioned the pot smell was first sniffed out by an undercover officer who lives nearby and smelled the marijuana himself.

Officers with MSOS had enough evidence on Friday morning that a judge signed a search warrant for officers to raid Alkire's house.

Lt. Williams said, "it was a very sophisticated grow operation, as far as big, it's one of the biggest I've seen so far."

Rich Amacher, who lives two doors down from Alkire said, "I came home and there were police cars everywhere, and I figured something was going on." Amacher along with other neighbors were dumbfounded that the former US Army soldier was hauled off by police for an alleged growing operations.

"He seemed like being an ex-soldier he was a person who had high values and was working and taking pretty good care of his property and doing some renovations," Amacher said.

Because of where Alkire's house is located his charges may be enhanced because of what is nearby.

"The park is right across the street, and down the street is we have the church with the daycare, and then down the here to the east you have St. Monica's Church and school," said Lt. Williams.

Parents picking up their kids from school weighed in on the 1000 foot enhancement penalty. Cami Soule said, "I do believe as close to the school that he (Alkire) is, he does need to be prosecuted."

Amacher said, "I'm glad they found what they did, because it was there and I just hope this can be a lesson to others who try to do the same thing to realize we are not going to put up with it and there are decisions to consequences you make."

Both Amacher's daughters went to Mishawaka schools with Alkire said Amacher and he also said his wife a teacher in the district taught the 28-year-old man when he was in school. He also mention on a recent visit by one of his daughters she said she smelled marijuana in the air, but it was too hard to detect where it was coming from.

Charles Alkire's friends and roommate were hoping to bond their friend out of jail and were disappointed when ABC 57 informed them that he did not have a bond yet, because the jail's booking department said he wasn't formally charged until he goes in front of a judge. At last check late Friday  afternoon, the prosecutor's office said they had not received the paperwork on Alkire's case from MSOS yet. Legally they have 48 hours to charged him before he has to be released.

Lt. Williams said he couldn't comment on how much pot was confiscated, the street dollar amount of the pot, nor what specifically he meant by the operation being a "very sophisticated grow operation."