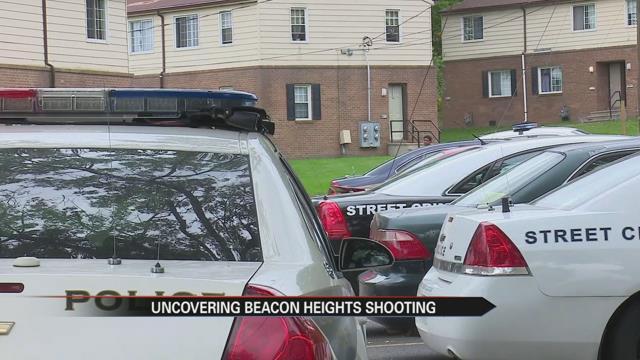 In October, South Bend Police have been called three times to the Beacon Heights Apartment Complex for assault reports and last night an incident escalated to a shooting.

Police says as of Tuesday Morning the victim is still in the hospital with life threatening injuries, but need to contact family first before releasing his name.

At Beacon Heights Apartments it is unclear whether the victim lived there but his blood is still on the sidewalks.

“To know there was a shooting going on right in front of my house that’s really scary it makes me not want to let my kids play outside,” says Tiara Montgomery who has lived in Beacon Heights for two years.

Tiara Montgomery has a toddler and nephew that she brought inside just moments before a man was chased down by another man firing a gun.

With fights happening more often near her home she wants some changes.

“More security instead of just the one car sitting there, probably have them through the complex,” says Montgomery.

Management at the complex says they have sporadic security and will think about increasing their safety efforts after police investigate more.

“I’m not sure if the guy who did it is still out here it could happen again tonight, ya know what I am saying it’s a scary thought, it really is,” says Montgomery.

Police say they will be around the complex more often after the shooting and will release more details on the suspect and the victim by Tuesday morning.