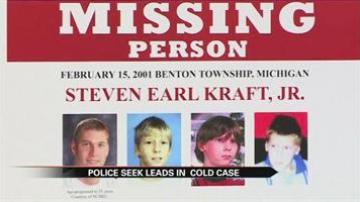 Kraft left his home in the early evening to take his dogs for a walk. The dogs returned a few days later, but Kraft was never found.

Police are revisiting the case because all the leads they have received have led to dead ends. They would like to get new leads in the case.

The Benton Township Police Chief said a single anonymous tip can rejuvenate a cold case- no matter how many years have passed.

"It's just like he dropped off the Earth or something," said Phyllis Turner.

"Everybody's changed now. Everybody that lived on this road is gone," said Lannie Turner.

Phyllis turner and her son Lannie are the only remaining neighbors who lived on Holly Street at the time of Steven Kraft's disappearance.

"As far as I know they were searching for quite a while and over the years there's always been somebody at this time of the year is trying to find him," said Phyllis.

"I looked for him. But there wasn't no sign of him nowhere. They found the dogs but that's about it," said Lannie.

An extensive search--with officers on horseback and helicopters in the air-- turned up nothing.

Now police are asking for a fresh lead.

"We believe that there are people out there in the community who have not yet come forward, or who may have old or new information. Our plea to these individuals is to come forward no matter how insignificant you feel this information is," said Vincent Fetke, Police Chief of the Benton Township Police Department.

Kraft's parents sat in the audience and watched as their daughter, Jodi Bopp, pleaded with her brother to call.

"Steven I need you to be brave today. I need you to reach out to us. Please, if you can get to a phone for even a few moments call 911, say your name and even if you don't know who you are we will find you I promise," said Bopp.

Since his disappearance, Kraft's family has moved and their home was torn down for airport expansion.

Bopp says even though it has been 13 years, her memories of her brother are as strong as ever.

"The thought that is plaguing me today is I've realized-you Steven-have been missing more than you've been present. That we have spent more birthdays without you than with you," said Bopp.

Kraft would be 25 years old today.

If you have any tips, call the Benton Township Police or Crime Stoppers.