Police: Be a good witness rather than putting yourself, others in harm's way 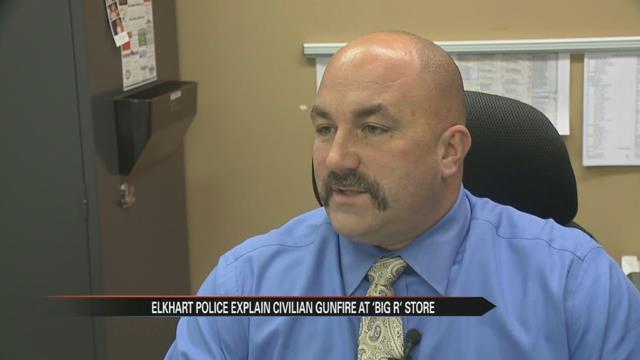 A shopper not only witnessed an alleged crime happening at the Big R supply store on South Main Street in Elkhart Monday, he allegedly tried to stop it with his gun. Many viewers spoke up in the comment section of ABC57's Facebook page saying the shopper should lose his weapon and permit.

“It is possible that charges will be brought against him,” Elkhart Police Sergeant Chris Snyder said. “A lot of it’s going to depend with how things play out and what we’re able to figure out with the case.”

The man in question was shopping at Big R supply in Elkhart Monday morning when he noticed two white males allegedly shoplifting.

The customer joined a few store employees in chasing after the two men and police said as the suspects got into a red pickup truck in the parking lot and started to drive away, the man drew a weapon.

“That non-employee drew a handgun that he had with him and fired it at the two suspects,” Snyder said. “Those suspects got in their car and left, and last we knew, they were southbound on South Main Street.”

The two suspects, who police say are in their twenties or thirties, are still on the loose. Nobody was injured by the gunshot but viewers wanted to know if the customer would keep or lose his weapon and permit.

“We don’t know exactly what the outcome of this case is going to be,” Snyder said. “So we would not take [the gun] away from him. We would not restrict his rights to that.”

Snyder said that may change if the man gets criminally charged. But more importantly, Snyder said this incident is an opportunity to remind people of when and when not to use firearms.

“That weapon is there to protect yourself or others,” Snyder said. “And somebody that’s running away from you, getting in a car to even go further away from you does that really pose a risk to you or to anybody else?”

Snyder said rather than directly intervene if you see a crime happening, be a solid witness.

“We [police officers] always love it when we get to a scene and we have lots of very good witnesses,” Snyder said. “That’s what we encourage people to do. Be there, get as much detail about the two suspects and their vehicle and different information like that and just be able to relay that to the police department.”

By staying on the sidelines and taking detailed physical and mental notes, Snyder said you are helping police and helping yourself.

“It’s not always best to intervene,” Sergeant Snyder said. “Sometimes you have to think about what you might have to go through as an individual and what the repercussions for what you do are going to be.”