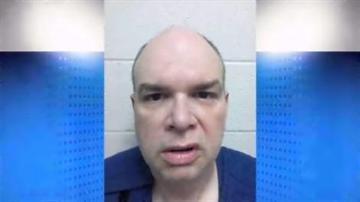 GRANGER, Ind. -- 25 years ago he robbed a Mishawaka gun store and murdered the owner. Now David M. Landrum is back behind bars for breaking into yet another gun shop.

In the court documents ABC 57 obtained. Landrum said he will do it again as soon as he's let out of jail.

Wednesday, ABC 57 talked to the surviving family of, Burl Thacker, the man Landrum murdered back in 1987.

Thacker's eldest son, Michael Thacker, says their family feels safer knowing Landrum is back behind bars, but say if he is let out again he will continue to be a threat to Michiana.

When Michael Thacker saw the face of David Landrum, 45, once again in the news, he immediately recognized the man that shot and killed his father in their family-owned gun shop just two days before Christmas nearly 26 years ago.

Michael's mother was home that day and recalls the tragic events like it was yesterday. She says the then 19-years-old, Landrum walked into their Mishawaka gun store and shot her husband, Burl Thacker, in the face while two accomplices waited outside.

Moments later, Landrum fled the scene in a getaway car after he and his partner grabbed as many handguns as they could carry.

"It impacted us a lot." said Michael Thacker. "Every Christmas is a bad memory."

So, it did not surprise Thacker,  when he learned police arrested Landrum Tuesday morning for attempting to rob Granger Guns. In fact, Thacker remembers Landrum first gun store robbery at just 15 years old, in which he cut a hole through the roof of the store to gain access.

"I’m just glad no one got hurt because it could have been a repeat situation," said Michael Thacker.

According to court documents, police found the convicted killer parked outside Granger Guns dressed in dark clothing, wearing a ski mask, gloves, knee pads and plastic covers over his shoes.

During the search, Landrum first told officers that he was just dumpster diving, then he later admitted to police he planned to break-in to the gun store.

Landrum told officers he didn't like the direction the country was going in and needs firearms to protect his family.

Landrum also told police he had been plan the robbery for some time.. And had even cased the store to study the layout and its security.

"Evidently he doesn’t have a conscious," said Michael Thacker. "Because otherwise he wouldn't be doing what he is doing. He wouldn't be breaking into other gun shops and trying to steal things."