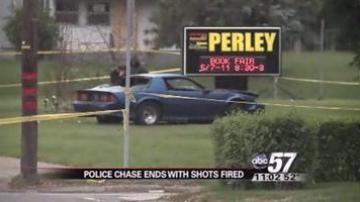 SOUTH BEND, Ind. - A police chase ended Saturday afternoon with a car crashing into the school sign at Perley Academy.

The chase ended before 6 p.m. when officers started shooting at the car.

According to our reporter on the scene, the suspect hit a patrol car, and that's when officers opened fire.

The suspect was shot and taken to Memorial Hospital, his condition wasn't immediately available.

Eddy Street is closed near Perley Academy as the investigation continues.

It's not known if the suspect shot at police or if he was armed. An officer was also taken to the hospital with non-life threatening injuries.

We learned from witnesses that family members were at the scene of the crash yelling that their father was killed by police.

Investigators have not confirmed if the suspect is alive or dead at this hour, but Metro Homicide is at the scene investigating as they do with officer involved shootings.

Neighbors in the area are pretty shaken up.

Kyle Heatherly said he was inside watching television, when he heard tires screeching and police sirens.

"I just came outside, and I saw a line of police officers just open fire at this vehicle,” said neighbor Kyle Heatherly.

He said, minutes later, the suspect's three kids showed up and were very upset that their father had been shot.

"They were cursing calling the policemen pigs and everything", said Heatherly.

Heatherly said he wasn't sure if the police made the right decision.

But he said he was afraid someone was going to get hurt.

"It's right in front of an elementary school. There could have been kids inside school,” said Heatherly.

And he said he feels for the suspect's kids.

"I can't even imagine how they feel right now,” said Heatherly.