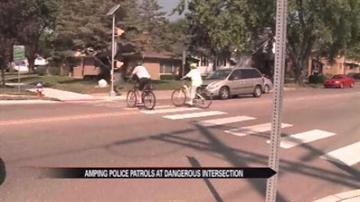 MISHAWAKA, Ind. -- ABC57 showed you Tuesday that cars don't necessarily stop for pedestrians when the yellow lights are flashing near the intersection of Logan and Wilson streets in Mishawaka.

We asked Mishawaka Police Lieutenant Tim Williams to walk the area with us.

Williams pulled a driver over Wednesday morning for not yielding to a pedestrian at the intersection.

"She had pushed a button to activate the lights and there was a northbound car. She didn't even slow down for the pedestrian who already had the front wheels of her stroller out into the intersection," said Williams.

When we tried to cross the street together, a car almost didn't stop.

"She said, 'Is this new?' And I said, 'Well it has been here since they finished the bridge,'" said Williams.

It appears that a lot of drivers just don't understand the rules of the walkway.

"I think we can help that out by maybe having some better signage here to let drivers know beforehand that they need to yield or changing the color of lights from yellow to red like Notre Dame has," said Williams.

Drivers seem to pay more attention to the crosswalk, with red flashing lights, on Twyckenham near Notre Dame.

For many that live near the Logan Street crossing, they fear it is an accident waiting to happen.

Williams says their goal is to have officers in the area so it is safer for pedestrians.