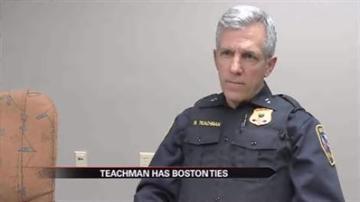 SOUTH BEND, Ind. -- As the city of Boston tries to recover from Monday’s tragedy, one of South Bend's newest and most prominent residents, the chief of police, is coping with his personal connections to the Boston community.

South Bend Police Chief Ron Teachman spent 34 years working in a Boston suburb before being named the chief of police in January.

"I wanted to be there by their side to assist in whatever way I could, other than sending an email and expressing my concern and my prayers and my thoughts,” said South Bend Police Chief Ron Teachman.

For Teachman, the explosions at the Boston Marathon hit too close to home.

"Police commissioner of Boston Ed Davis is a friend. Rick Dolaray from the FBI, the special agent in charge of the Boston office is a friend. These are people that I met with regularly, at least monthly. Worked with them on cases,” said Teachman.

Teachman spent most of his career in New Bedford, Massachusetts--just 55 miles southeast of Boston.

In addition to friends and colleagues in the police department, Teachman was a member of a local track club and had friends participating in the marathon.

"They were all engaged in the race as runners and spectators. Some of them were injured,” said Teachman.

Teachman was able to connect with many of his friends and confirm their safety.

But he knows first hand the work his former colleagues have ahead of them.

"To do this you need the expertise. You also need the community to report anything that was suspicious that they may have neglected to say and it's really just sorting through it all, discerning the leads and then chasing this thing down. I am confident they will. The people involved are as good as there are in this industry,” said Teachman.