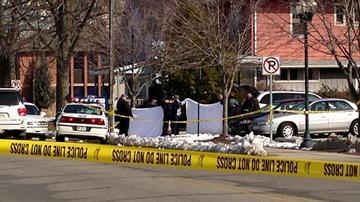 GOSHEN, Ind. -- Goshen Police are investigating a murder-suicide in the 100 block of North 5th Street.

Police say when they arrived they found two people dead on the ground in the parking lot on the east side of North 5th Street.

Their investigation revealed 51-year-old John Eric Haitsma of Goshen shot and killed 48-year-old Millicent Morros, then turned the gun on himself.

Haitsma was a former Goshen Police Department officer. He resigned in 1998 to operate his own landscaping business after spending 8 years with the department.

Morros was a paralegal with Yoder, Ainlay, Ulmer and Buckingham.

Co-workers say Morros was on her way to work just across the street from where she was shot.

Representatives from the law firm did not want to be on camera but say Morros began working at the firm in 2010 as a legal assistant and she was recently promoted to a paralegal position.

Morros is described as a hard worker who will be deeply missed.

Police confirmed Haitsma and Morros had a past relationship and that this was not a random act of violence.