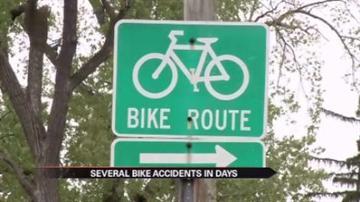 SOUTH BEND, Ind. -- May is National Bike Month and the weather has been great for it! However, that means cars are sharing the roads with more bicyclists.

Already, police say there have been several car accidents involving bicyclists. This week alone, there were four accidents in just two days.

Next week kicks off Bike to Work Week and Bike the Bend, so drivers can expect to see more bicyclists out than ever before.

That is why bike safety advocates want to make sure everyone is doing what they can to be safe.

Now that the nice, spring weather is here folks are packing away their winter clothes and heading outdoors.

"It’s been beautiful, beautiful," said bicyclist Larry Tepe. "Hardly any rain except for last night and it’s just been a gorgeous time to come out and ride."

Yet already sharing the road has proved dangerous. Just this week, South Bend police responded to four accidents in two days, all of which involved cyclists who were struck by a car.

"This is the time of the year that bicyclists are getting out for the first time, motorists aren’t really aware or not used to them," said President of Bike the Bend Glenda Lamont. "So, these things happen."

However, Lamont says it is not just drivers that need to be alert it is bicyclists too and she says the rules are simple.

"That’s one of the first rules, be visible," said Lamont. "Another rule or guideline is to be predictable. Don’t be weaving in and out, ride in a straight line and rules of the road say bicyclists ride with traffic."

The City of South Bend has made an effort to become a bike-friendly community, which makes the rules of sharing the road that much more important, especially to bicyclists like Tepe.

"I think I was a big violator several years ago myself, but I have seen the number of accidents," says Tepe. "I am more conscious of, like I said before, stoplights and stop signs."

Right now the city has 60 miles of bike paths and just this week Mayor Pete Buttigieg promoted bike safety by unveiled the city’s first sharrow, which is marker on the road to reminded both drivers and bicyclists to share the road.