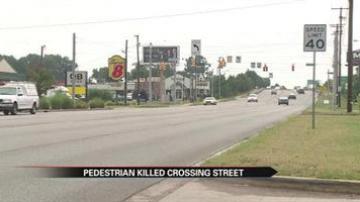 ELKHART, Ind. -- The Elkhart Police Department released the names of the pedestrians involved in the accident at SR 19 and Windsor Monday night.

Two pedestrians were struck by the same vehicle.

One of the pedestrians, Maryanne Foyuth, 60, of Lawrenceville, New Jersey was taken to the hospital with non-life threatening injuries.

The other pedestrian, Darryl Foyuth, 66, also of Lawrenceville, New Jersey, was taken to the hospital where he was pronounced deceased.

The investigation into the accident is ongoing, but alcohol and drugs do not appear to be a factor in the crash.

On March 22, another pedestrian, 72-year-old Joe Scroggins, was killed in the 2200 block of Cassopolis Street.

Drivers say there is a two mile stretch of Cassopolis Street that is dangerous to pedestrians.

Scroggins' nephew, Timothy Scroggins, says it would be worthwhile to invest in crosswalks.

"I know my uncle was worth more than any amount of money that could be spared to put a cross walk in or sidewalks. Hopefully if we all stand together we can have something done about this and maybe no one else will have to pass," said Timothy.