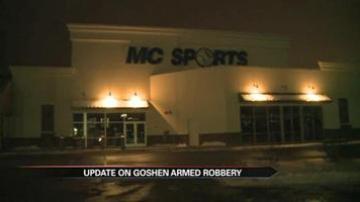 Just after 8 p.m. Saturday police were called to the Market Centre area on Elkhart Road.

According to witnesses, three men wearing ski masks entered the store and ordered everyone to the floor.

Police said 11 people, including 2 store customers, were tied up with cable ties as the suspects robbed the store.

The suspects fled in a Dodge Neon. The vehicle believed to be theirs was later found in the area of Maple Court Apartments.

No injuries were reported in the robbery.

This investigation is still on going.

If you have any information contact Goshen Police Department by email at police@goshencity.com or call 574-533-8661, or contact Crime Stoppers at 1-800-342-STOP.