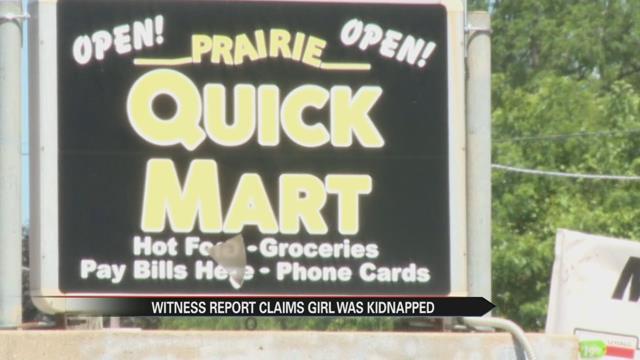 Police say just after 1 p.m. Sunday afternoon, witnesses reported a teenage girl was pulled into a car by the driver.

The victim is described as a white female, 13-14 years-old, 5'4", thin, with black hair in a ponytail. She was last seen wearing a black top, blue jeans, and black flip flops.

The suspect is described as a Hispanic male, around 5'6", with dark, slicked back hair in a ponytail and a medium build.

Witnesses also say the suspect was possibly in his 30’s, wearing all dark with some facial hair on his chin.

Police say his vehicle is a Chrysler 300 with tinted windows and a black stripe on the hood.

The owner of the Quick Mart says just after 1 p.m. Sunday, he heard crying, possibly three or four different outbursts.

At the store, during that time, was a family of four.

Quick Mart’s owner says a little girl, from that same family, was standing just outside his store when she saw a young female being dragged by her hair into a vehicle.

No children matching the child's description have been reported missing to police.

If you have any information regarding the incident contact South Bend Police Department.