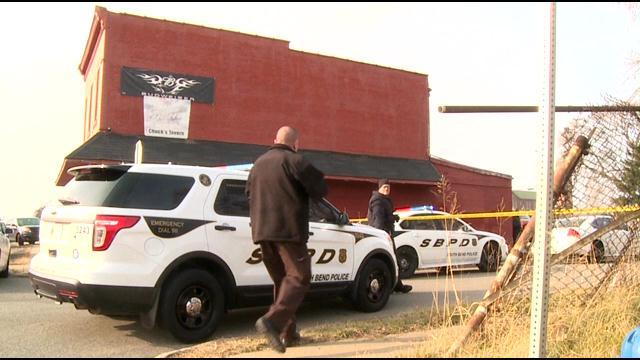 Officers spent Sunday investigating the mysterious death of a 25-year old female from South Bend, who police believe died while at a work-related Christmas party Saturday night at Chuck's Tavern on the corner of Sample Street and Arnold Street.

"It was kind of like we are all gonna go down here and meet and have a good time and that's how it went,” said St. Joseph County Metro Homicide Unit Commander Tim Corbett. Police say the couple that owns the bar discovered the woman's body Sunday afternoon around 1:30 p.m. "When they got there, they found a female approximately 25 years old deceased. We are handling this as a homicide at this time.

Police searched for and uncovered a 1997 gold Chevy Lumina, owned by the victim. They also interviewed a potential suspect Sunday night.

"It just makes me wonder what is our world coming to,” said Roger Shull, who lives than a block away from where the woman's body was found. "You can't even walk out of your house now these days or you can't even walk down the street you never know when you're going to get hurt."

Although the body has been ID'd, police still aren't releasing the woman's name. "I don't know much worse news you could receive and your parents or your child or somebody has been killed,” Commander Corbett. “We have people that are traveling right now that are family members and the last thing we want to do is have them here from my neighbor that the relative is dead and the end of having a heart attack or getting in a wreck."

“Our prayers and our hopes and our dreams be with the family, because we do not need any violence," said Schull

Authorities are hoping to have an autopsy done Monday to determine the exact cause of death.