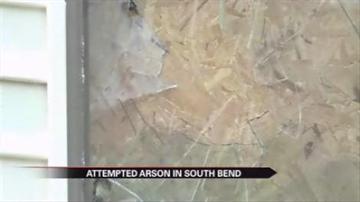 SOUTH BEND, Ind. -- One South Bend family is afraid to go to sleep after someone threw a flaming glass bottle at their bedroom window in the middle of the night.

Police say it happened Saturday night on the 1200 block of Woodfield Avenue.

The family member only agreed to do an interview if ABC 57 did not reveal his identity for fear of retaliation.

Luckily the flaming glass bottle did not make it through the window, however it did start a small grass fire. The family never got a look at the suspect.

Police waited until the bottle cooled off and collected it for evidence, then they started looking for a suspect.

“He just came in and asked us do we know anybody that would probably do it or why,” said the victim.

But the victim says it’s a mystery why anyone would try and burn down his home.

“We do not have any enemies,” said the victim.

He says with summer on the horizon, he hopes it was just some mischievous kids.

“I think it was more someone doing something dumb to try and enjoy themselves,” said the victim.

Police are still investigating the attempted arson and do not yet have a suspect.