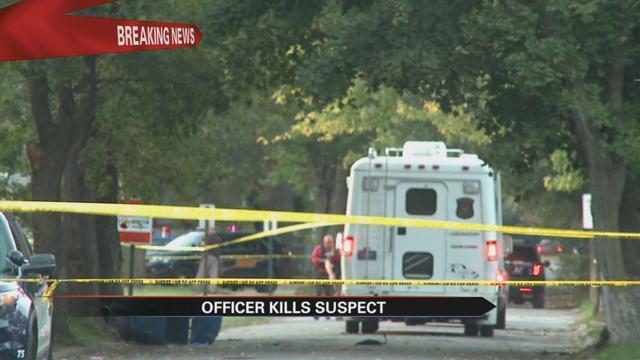 Department of Public Safety Chief Daniel McGinnis, Jr. says the call went out at 2:12 a.m. from a third party caller about a subject being held at gunpoint in the 900 block of Pavone Street near Empire Avenue.

Four officers in total responded to the scene at the time of the shooting.

McGinnis says police put a plan together to approach the suspected home and made contact with residents who did not make the call to police and say they had no problems.

He says the people inside the suspected home were cooperative and invited officers in to search and they found no issues.

McGinnis says that’s when officers and the homeowner go back outside to talk and shots rang out from the south.

Police say the suspect was a black male riding a bicycle and it appeared he was shooting a semi-automatic handgun while riding.

Police say four to five shots rang out initially towards the home before an officer returned fire. Then shots continued between the officer and the person shooting. The officer fired 15 shots hitting the shooter.

McGinnis says the officers thought they were being shot and “shots continued to ring out”.

The suspect later died from his injuries.

McGinnis says no officers were hurt during the shooting and an investigation into the shooting began immediately.

They do know who made the 911 call but will not release that information. He says the caller was not working with the suspect in this shooting.

Benton Harbor Public Safety has 3 body cameras and plans to release the footage once the suspect’s family sees it first, according to McGinnis.

During the investigation, police found that the suspect’s gun was completely expelled of ammunition and a second semi-automatic handgun was found in the shooters pocket on his left pant leg which was taken in as evidence.

Police say they have had prior interaction with the suspect and believe he has a criminal record.

McGinnis says police do not believe this was an ambush; however it is clear that there was some intention to harm someone in the residence.

An autopsy is underway in Grand Rapids, Michigan. Stay with ABC57 for updates on this shooting.