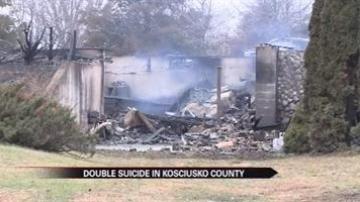 Deputies say 18-year-old Nick Lowry shot and killed himself Monday at his home off County Road 800, north of Mentone.

Later that night, police responded to a fire at the home and found his dad, 53-year-old David Lowry, dead of a self-inflicted gunshot.

"The father was actually located at a picnic table at the residence outside in the yard area," said Chad Hill, Kosciusko County Sheriff's Department. "He had retrieved some of the items from the home it appears and had secured those items that it appears that he wanted to salvage from this potential fire."

Six fire departments were called to put out the fire.

When ABC 57 arrived Tuesday, part of the home was still burning.