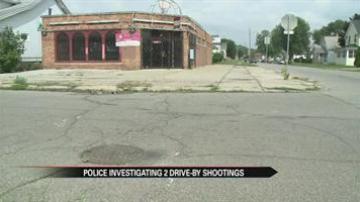 SOUTH BEND, Ind. -- Residents on the west side are worried because there were two shootings reported Saturday night.

Police said one man was taken to the hospital with a gunshot wound to his leg after an unknown suspect drove by and shot at him.

Police said the shooting happened in the 2500 block of Ford Street around 8:30 p.m. on Saturday.

Just a few blocks away another drive-by happened in the 600 block of South Bendix Street where police said an unknown suspect fired multiple rounds at a home.

One mom who lives in the neighborhood said she was giving her little kids a bath when she heard gunshots outside.

Cristina Hernandez said, “The violence needs to stop in this neighborhood because it’s not the first time. I’m a mother of three and it needs to stop period.”

Gary Weese said, “I don’t know exactly the reason for it but we’ve heard that it is gang related but I don’t know that for a fact. I’m not really sure who’s doing it.”

If you have any information regarding these shootings call the South Bend Police Department.