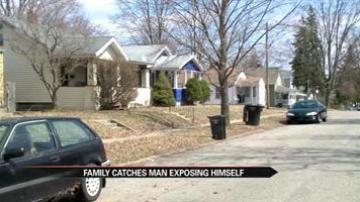 SOUTH BEND, Ind. -- Residents on Donald Street in South Bend are on edge after a resident found a man just outside her home fondling himself. The suspect has not been located.

The woman who spotted the man asked not to be identified.

"Me and my daughter were sitting here watching TV before I put her to bed and I kept hearing a tapping on the window," said the victim.

She first thought the tapping on the window was just the wind.

When it didn't stop, she opened her front door to look out.

That's when she saw a man standing next to her bushes fondling himself.

"I heard him say, 'You like this?' And I came back inside, shut the door, locked it," the victim said.

She's not the only one who saw the man.

"I got a phone call from my neighbor and she sounded really panicked and she told me that some man was in her yard and I looked out my front window and I seen him standing directly in front of her front window," said Karli Robichaud.

Robichaud grabbed her phone and called police. As a mother of three, she wasn't taking any chances.

Because no one got a good look at the man, police were unable to create a sketch.

But he had been seen in the neighborhood earlier in the day talking on his cell phone.