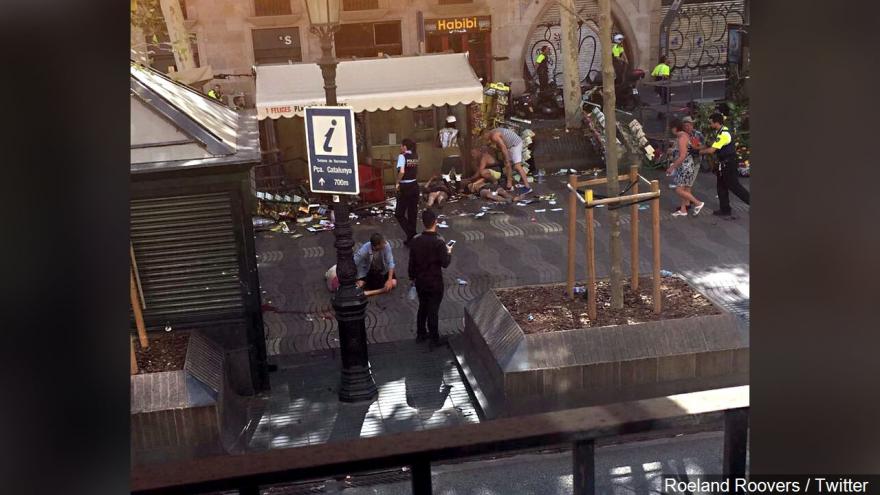 (CNN) -- Spanish authorities on Monday shot and killed the suspected driver of the van that plowed into crowds last week in Barcelona, according to the Catalan police.

Younes Abouyaaqoub was killed during an operation in Subirats, west of Barcelona, police said in a tweet. Police earlier said they had shot a man wearing an explosive belt but did not immediately identify him as Abouyaaqoub.

A robot was sent to remove the explosives belt from the body before officers were cleared to approach it and make a positive identification, authorities said. The suspect also had knives in his possession when he was shot, said José Lluís Trapero, head of Catalan police.

A woman alerted authorities after seeing police photos of Abouyaaqoub and becoming suspicious that the man was wearing long sleeves when it was about 85 degrees (30 degrees Celsius) outside, he said. Witness accounts suggest Abouyaaqoub was alone when police arrived, Trapero said.

Police killed Abouyaaqoub in a rural area, sparsely populated and surrounded by pine trees. Following the gunfire, a police helicopter circled overhead. Several police officers and squad cars were nearby, but few onlookers.

Abouyaaqoub, a 22-year-old Moroccan national, is alleged to have been the sole driver of the van used to kill 13 people Thursday on Las Ramblas, a thoroughfare that's a popular tourist destination. More than 100 others were injured.

Investigators said Abouyaaqoub fled the scene of Thursday's attack on foot and hijacked a car to escape. Abouyaaqoub allegedly stabbed the owner of the car, Pau Perez, as he parked the vehicle, and drove off with his body inside the car.

Police fired on the car after it rammed through a checkpoint just after 6 p.m. Thursday, but Abouyaaqoub was able to flee a second time. Perez was found dead in the vehicle, making him the 15th victim of the attacks in Barcelona and the Catalan town of Cambrils, where one woman died early Friday when attackers drove into pedestrians there.

Speaking to local radio, Joaquim Forn, the Catalan interior minister, said all evidence pointed to Abouyaaqoub being the sole driver and that security services were working with other agencies around Europe to find him.

Police carried out more raids overnight at homes in the town of Ripoll, north of Barcelona, where eight of the 12 suspects lived, Forn said.

Abouyaaqoub was one of 12 terror suspects linked to the Spain attacks. Authorities have said none had any previous link to terror activities.

On Saturday, Spanish Interior Minister Juan Ignacio Zoida said that the terror cell believed to be responsible for the attack had been "completely dismantled."

Meanwhile, Catalan police said in a series of tweets Monday that four suspected terrorists have been detained, and eight have been killed, "but that does not mean that the investigation is over. We keep working."

The investigation has focused on a property in Alcanar, suspected of being used as a base to make explosives that could have caused even more devastating attacks had they not blown up prematurely Wednesday before the attacks.

Police believe Muslim cleric Abdelbakir El-Satty is among those who died in the Alcanar blast.

The cleric once served a jail sentence for drug trafficking in the eastern Spanish province of Castellon, not in Catalonia, Catalan Justice Minister Carles Mundó i Blanch said.

Some Spanish media reported he shared a jail cell with one of the terrorists involved in the 2004 Madrid bombings that killed at least 191 people and left hundreds injured.

Responding to those reports, Blanch said, "We are not aware that this person had any communication with any inmate in any prison in Catalonia. He finished his sentence and went free."

In Alcanar on Sunday, explosives experts brought in a bulldozer to clear rubble before conducting a number of controlled detonations at the site. The remains of two people have been found there.

So far, police have discovered the remains of more than 100 gas canisters on the site.

Alcanar Vice Mayor Jordi Bort told CNN the house belonged to a bank and the group had been squatting there illegally without its knowledge.

The town is home to a mix of residents and others who spend holidays or weekends here, he said. Neighbors said they did not suspect any wrongdoing at the property.

The septic tank of the house, which had only one floor, was used as storage for the tanks and explosives, Bort said.

A source briefed on the investigation said a preliminary assessment indicated there were traces of the powerful explosive TATP in the rubble.

TATP is made by adding acid to a mixture of acetone and hydrogen peroxide solution and can easily result in accidental detonation if mistakes occur in the preparation.

TATP was used in the November 2015 Paris attacks, the March 2016 Brussels bombings and the May bombing in Manchester, England.