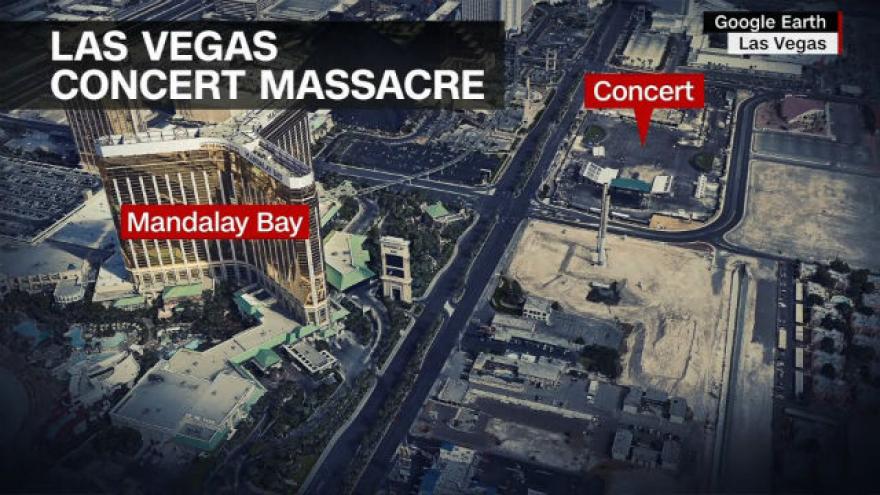 (CNN) -- Police on Monday said that Stephen Paddock shot a hotel security guard six minutes before he began shooting concertgoers from his hotel room at the Mandalay Bay Resort and Casino -- a striking change from an earlier police timeline of events.

Authorities said last week that security guard Jesus Campos had approached Paddock's room as the shooting was underway, diverting the gunman's attention. Police had said that after Paddock shot at Campos through the door, the gunman didn't fire any more shots into the crowd.

Clark County Sheriff Joseph Lombardo said Monday that Campos was shot in the leg on 9:59 p.m. on October 1. Campos had been investigating an alarm that went off in another room on the same floor, signaling that a door had been left open.

At 10:05 p.m., Paddock, 64, began firing into the crowd at the Route 91 Harvest Festival, authorities said. He continued firing for about nine to 11 minutes.

Paddock's final shots were fired at 10:15 p.m., according to police. Authorities do not yet know what made him stop shooting, Lombardo said. By the time officers entered the room, Paddock was dead from a self-inflicted gunshot wound.

Lombardo said that the revised timeline is based on new information that emerged over the course of the ongoing investigation.

"As I have conveyed to you from the very beginning -- and your zest for information and my zest to ensure the public's safety, and the calming of their minds -- is some things are going to change," the sheriff said. "Now, they are minute changes."

The initial police timeline said that the first two officers to respond arrived on Paddock's floor at 10:17 p.m. A minute later, the security officer told police he had been shot and gave them the location of Paddock's room.

Investigators are still piecing together evidence left behind in the hotel room and probing Paddock's background to determine why the retired accountant committed the worst mass shooting in modern US history.

Floyd Conrade, who was staying in the room one floor below Paddock on the night of shooting, didn't recall hearing the shot that injured Campos.

The sound echoed in his window, he said.

"I thought ... maybe it's something on top of the hotel," he said in an interview from Emporia, Kansas.

Conrade said he encountered police officers in the hallway when he tried to leave his room after the gunfire erupted.

Conrade said the the second breach rattled his hotel room.

Authorities have spoken to Paddock's brother and other family members, said Lombardo, who declined to discuss the interviews.

Lombardo said also police have found "no evidence to show there was a second shooter."

The sheriff said authorities have received 200 accounts of Paddock traveling throughout Las Vegas, and that he "has never been seen with anyone else."

"Currently, we do not believe there is one particular event in the suspect's life for us to key on," the sheriff said. said. "We believe he decided to take the lives he did and he had a very purposeful plan that he carried out."