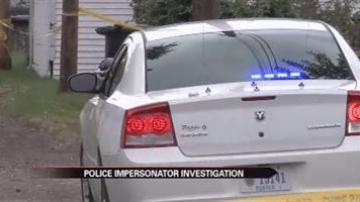 SOUTH BEND, Ind. --  South Bend police are on the lookout for a man who is going around the city impersonating police.  This incident occurred near Ireland Road in South Bend.

According to police, on Veteran's Day a man posing as a cop, driving a black Chevy Impala, pulled over a driver and threatened him with a gun.

He quickly flashed what appeared to be a legitimate badge, then cursed the victim and threatened his life with a gun.

"He threatened a man's life and you know it is not safe," said Hewitt.

Neighbors around Ireland Road in South Bend are concerned.  Reports of a phony police officer flashing a badge and pulling people over in the area makes them uneasy.

"It gets me wondering what is happening in South Bend," said Joshua Freeze.

Neighbors said the fake officer is making it tough for the real cops to protect the public.

"It makes it hard for people to trust the police when things like this are happening, because you do not know if it is real or if it is fake," said a neighbor.

They think it is important for police to verify their identity, but equally important for citizens to make sure the person pulling them over is legit.

"If you do not have the flashing lights, you should not just pull over for just anyone," said Hewitt.