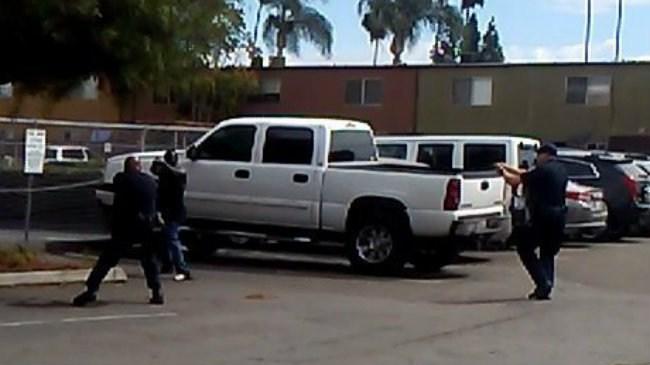 Alfred Olango, 38, pulled a vaping device from his pocket and pointed it at police Tuesday before one officer fatally shot him and another discharged a Taser, El Cajon police said.

His death set off demonstrations in the San Diego suburb as activists demanded authorities release video of the shooting. They also want a federal probe into Olango's death.

Protesters stopped cars and broke windows Thursday night, according to El Cajon police. A motorcyclist was knocked off his bike during the confrontation. Some threw glass bottles at police and pepper balls were used to disperse crowds, they said. There were no reported injuries.

Police have released little information except for a still photograph showing Olango in what authorities described as a "shooting stance," facing off with the two officers in a parking lot.

By Wednesday evening, police identified the object as a vaping device. The identity of one officer was revealed as Richard Gonsalves, a 21-year veteran of the force.

In a news conference, Mayor Bill Wells did not identify the second officer, except to say he was also a 21-year veteran.

Wells said he understood the frustration of demonstrators, who blocked a freeway exit Wednesday.

The protests were "angry and loud" but peaceful, he said.

Wells said he had seen the video and it pained him, but he called for patience as the investigation runs its course.

"I saw a man who was distraught, a man who was acting in ways that looked like he was in great pain, and I saw him get gunned down and killed and it broke my heart," he said. "If it was my son, I would be devastated."

On Tuesday afternoon, El Cajon police responded to a 911 call reporting a man in his 30s was behaving "erratically" behind a restaurant, Lt. Rob Ransweiler said.

According to the call, the man was "not acting like himself" and had been walking in traffic, endangering himself and motorists, police Chief Jeff Davis said.

The woman calling 911 claimed to be the man's sister and told the dispatcher he was mentally ill and unarmed, Davis said. Investigators have not been able to confirm whether the caller was the man's sister, he said.

Olango's mother, Pamela Benge, later said he was not mentally ill. He was mourning the loss of a friend, she said.

"He wasn't mentally ill, never," she said. "He was going through a mental breakdown. He lost someone dearly ... mental breakdown was not easy to control, he needed someone to calm him down."

Davis said they have tried to talk to the woman who made the 911 call.

"We tried to get her to talk to us. As you can understand, she was upset. She was not cooperating with us," the chief said, asking the woman to come forward to speak with investigators.

Officers did not respond to the first 911 call for 50 minutes because "it did take us that long to clear officers to get out there," Davis said.

Once they arrived, Olango kept his hands concealed in his pockets while pacing back and forth, police said. As a second officer prepared a Taser, the man "rapidly drew an object" and placed both hands on it "like you would be holding a firearm," Davis said.

One officer fired his gun at Olango, while a second officer discharged his Taser, he said. Both are on three-day administrative leave.

No trust in prosecutors to investigate police

Such assurances have done little to allay the community's concerns.

The Rev. Shane Harris, president of the San Diego chapter of the National Action Network, called the decision to release a still photo "cowardly." Harris, who said he had spoken to Olango's family, was one of several speakers addressing reporters in front of the El Cajon Police Department.

"We do not trust local prosecutors to investigate local police," he said, explaining the family's desire for a federal investigation.

Harris questioned how police could release such a seemingly damning photo while purporting to pursue all the facts and refusing to release video from witnesses and a nearby restaurant.

"We don't want to see a still picture of him pointing something that is not gun," said Bishop Cornelius Bowser of the Charity Apostolic Church. "The best way to move forward right now is through transparency."

Citing a countywide protocol pertaining to officer-involved shootings, Davis said Tuesday he was merely following guidelines in not making the video public. His department released the photo to counter "disinformation," he said.

"This (video) is considered evidence, and until it is deemed otherwise, it will be under the control of the district attorney's office," he said.

'They killed my brother'

In the aftermath of the shooting and Olango's death, Rumbie Mubaiwa began filming the scene on Facebook Live.

In the video, a distraught woman says she called 911 to get help for the man she says was her brother. She describes him as "sick."

A police officer interviews a witness, and two others put up yellow police tape. Officers can be seen congregating in the background as the sister sits on a rock wailing.

"You guys killed my brother in front of me," she cries as Mubaiwa records the scene. "Why couldn't you guys Tase him? Why? Why? Why? Why?"

Police have not confirmed whether the woman in the Facebook Live footage was Olango's sister.

Christopher Rice-Wilson, director of civic engagement for Alliance San Diego, told reporters Wednesday that family members requested privacy while they grieve and would make statements at some point.

Immigration and Customs Enforcement officials had twice tried to deport Olango, the law enforcement agency said in a statement Thursday.

Olango came to the United States in 1991 as a refugee. In 2002 an immigration judge ordered him deported after he was convicted of transporting and selling narcotics, the statement said.

ICE officials tried multiple times to get travel documentation needed from Uganda in order to remove Olango from the country. He eventually was released from custody in 2003 under an order of supervision requiring him to report to the agency regularly. His release complied with a Supreme Court ruling that banned the detention of foreign nationals if repatriation is not likely after six months of detention, the statement said.

In 2009, Olango was returned to ICE custody after serving a prison term for a firearms conviction in Colorado. Again officials tried unsuccessfully to get necessary travel documentation from Uganda.

Olango was re-released from ICE custody on another order of supervision. ICE said he reported to the agency as required until February 2015.